Lava At The Door

Some months ago, maybe even a year ago now, lava from the Pu’u O’o vent on Hawaii’s Big Island Kileauea volcano started inching its way towards the town of Pahoa.  Every day it came closer, consuming trees and bushes, over-running a Japanese cemetery, burning a shed to the ground.  And then it stopped, poised maybe a 100 yards outside of the house in its path; fearing the worst, people moved what they could out of the house.  Inexplicably, the lava stayed put and fingers of new lava then branched off in another direction and ever so slowly continued its creep towards the Malama Market.  Being cautious, store-owners began to empty their businesses of merchandise. 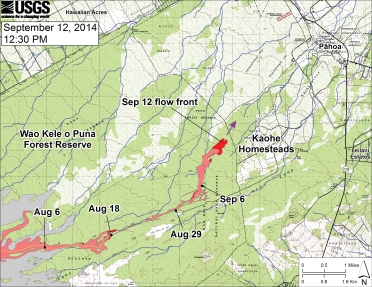 Every day the lava crept closer and closer.  And then, half a mile away, the flow stopped again.  It just stopped, although there was no way to know if the lava was just catching its breath, or if it had decided that the Malama Market just wasn’t worth the crawl.  Someone in Pahoa commented to a reporter: “You’ve got this thing just lurking outside your door.  It could take you out, but it doesn’t want to let you know whether or not it’s going to do that.”

How are we supposed to live with the fear of Life’s uncertainties?  For some, it is by maintaining a rigid daily schedule in which no time is allocated to the unknown.  For others, drink and drugs keep away the discomfort of not knowing what might happen.  For children, warning about the monster under the bed helps them get to sleep.  But a life lived in fear… is not living.  Living is being excited about what might happen next!  Living is going forward, not hunkering down!  Living is letting the unknown take us to where we have never been and to who we are not yet!  In the film “The Butler” the character Lee Daniels says, “Part of me was scared to leave.  It was the only world I ever knew”.  Scared or not, just as our bodies change over time, Life demands that we let go of our old way of thinking, and change.  But central to the issue of change is the worry: Will I still be me?

One way to find out is by making small changes in our daily life.  Drive to work by a different route.  Store the paper towels in a different place in the kitchen.  Watch an unfamiliar television show.  Central to the issue of change is that of flexibility, of the ability to let go of something in order to grow into something else, and Life… like lava… does not care that this might be uncomfortable for us; therefore, we can passively wait for Life to force change upon us, or we can reach out and embrace change, slowly getting used to seeing it as a good thing.

A correspondent friend of mine once wrote, “I still want to hide my darker days and self from you, as if they might not be real if I don’t talk about them, if I ignore them.”  Just because we ignore something does not make it wink out of existence, as my friend knows, even though all of us might sometimes wish it to be so!  The truth of the matter is that by not ignoring what makes us feel uncomfortable we can slowly get used to a required change even though that process can feel as ill-fitting as a pair of new shoes.  By slowly getting used to daily change, when the lava… or Life… is at the door we won’t have to freak out!

1 Response to Lava At The Door