Dealing With The Hurricane

During campaign election cycles I know to stay away from Louisa!  Depending upon whatever debate she has just watched, or whatever political commercials are hitting the airwaves with increasing frequency, she can swing wildly from one point of view to another!  Given that she is an all-or-nothing kind of person,

whatever political argument which has captured her fancy results in discussions with her that can be like dealing with the fanaticism of “the newly converted,” leaving you feeling besieged and bruised!  Every four years, just for three months, I don’t call Hurricane Louisa or go to see her or respond to her emails; my own sanity has come to require this approach!

We are now in our national cycle known as “The Election Campaign”, a 3-month non-stop deluge by both political parties who try to brainwash us through television commercials and derogatory sound-bites!  We are bombarded by an endless stream of pundits telling us, “This is what we need to do!” 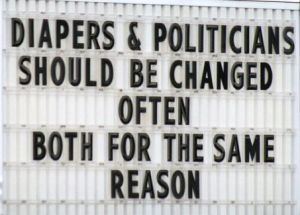 During this period I find it is necessary for me to limit my exposure to the daily news lest I become overwhelmed by the tsunami of slanted information!  As a result, I watch half an hour of television news in the morning when I get up, and then half an hour in the evening.  My day, bracketed by this input, is spent in mulling over what was presented, figuring out what in it makes sense to me and what, to me, seems like a deliberate distortion.  I find that people tend to fall into one of two categories… those who say that the glass is half-full, and others who view the glass as half-empty… and during the political season the arguments of both parties seem to me to be slanted towards one or the other approach.  The problem that I find with this is that it gives people the impression these two ways are the only ways of viewing something: things are great, or we are doomed!  What such an approach misses is the fact that the glass is actually re-fillable!

Being swayed by campaign commercials is not the same thing as thinking!  In order for us to know what we think about something, about Life, about ourselves… requires a degree of reflection.  In order to live a life of reflection some people withdraw from general society by entering a monastery; the rest of us, however, 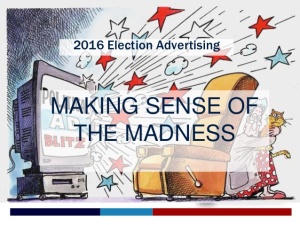 are also called to be reflective, no matter where we are or how we live.  Reflection does require some degree of stepping outside the flow of Life around us in order to make sense of things.  This can be by finding a quiet spot during our lunch-break.  It can be by getting up a bit earlier in order for us to have the time to sit and think.  It can be by deliberately limiting the extent of our exposure to things.  This is not the same thing as completely withdrawing from society; rather, it is a daily way of creating some space in our hectic life to assess for ourselves what society is presenting to us.

2 Responses to Dealing With The Hurricane